Mahouka Koukou no Rettousei Wiki
Register
Don't have an account?
Sign In
Advertisement
in: Characters, Japan, Magicians,
and 3 more

Chapter 1, The Summer it All Began

Shiba Miya (司波 深夜), born (Yotsuba Miya), was the older twin-sister of the current Head of the Yotsuba Family, Yotsuba Maya. Miya was the largest shareholder of Four Leaves Technology. She was the mother of Shiba Tatsuya and Shiba Miyuki.

Miya was a charming woman with jet black hair, white skin, red eyes and a mature beauty that was ten years younger.

Her status as the oldest daughter of the Yotsuba Family, and twin-sister to the head of the family permitted her many luxuries. She was gentle, polite, and lady-like in all of her responses and attitude towards others. She had perfect etiquette when dealing with people during social events.

After the Artificial Magician Plan and the The Nightmare of 2062, Miya was relatively emotionless after abusing her Mental Interference abilities on both her sister and son. It is not known whether it is from a side effect of the Mental Interference Magic, a sense of guilt, or even some other different mental effect. Like most of the Yotsuba Family, Miya did not consider Tatsuya a member of the Yotsuba and showed no care or affection towards him as a son like a mother typically would.

However, it is also noted that she seemed to be suffering for being unable to love her own son. Before Sakurai Honami left to protect Tatsuya in Okinawa, she praised her son's intelligence, making Honami realize that after everything, all mothers are capable of boasting about their children.

In Volume 16, Maya reveals to Tatsuya that she and Miya were happy at Tatsuya's birth. Despite their distant treatment, they always tried to love him throughout his life. 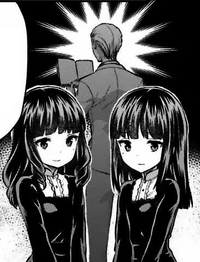 Miya was born as the oldest twin-daughter of Yotsuba Genzou. She was married to Shiba Tatsurou by the order of the Yotsuba Family in order to seize his prized genetic advantage. Because of being close to Genzou, Kudou Retsu became Maya and Miya's private teacher for a short time in their youth. [1]

Untouchable - The Nightmare of 2062

After her twin sister had been rescued by her father from her kidnappers; she was asked by her father to use Mental Interference Magic on her sister, who was on the verge of a mental breakdown from her experiences of being experimented on by her kidnappers from Dahan. This allowed all of her sister's terrible memories to be converted to simple information in her mind, but because Miya couldn't differentiate between Maya's memories, all of her memories are converted to information. Since memories and experience is what makes a person and his/her personality; Miya, in a sense, killed her sister.

Deeply affected by what she had done, Miya starts excessively using her magic without care, leading to the deterioration of her health. She never made up with her sister since that incident, causing their relationship to be heavily strained.[4]

Miya, Tatsuya, Miyuki and Honami goes to Okinawa where they are attacked by an enemy submarine in an attempt to kidnap them but was thwarted by Tatsuya using Decomposition on their missiles. [5] Miya decides to watch a Ryuukyuu dance and gives Tatsuya a day off so he heads to Okinawa Onna Air Base, taking up the offer of Captain Kazama Harunobu after the submarine attack but Miyuki asks to accompany him to Miya's surprise and reminds them to hide their identities. [6]

On the eve of the Okinawa Defense Naval Battle, Miya receives a call from Maya and tells the others that Maya has arranged for them to shelter at the base, likely the reason Kazuma called Tatsuya. Miya's intuition senses that enemies has infiltrated the base causing her, Miyuki and Honami to be shot by the enemy but Tatsuya uses Regrowth on them for the first time and joins Kazama in repelling the invading enemy. While Tatsuya is repelling the enemy, Miya reveals to Miyuki the experiment they did on Tatsuya and that his only remaining emotion is the desire to love and protect Miyuki, his one true emotion, which is something he knows as well and they directed the attachment to Miyuki, who would be with him far longer than Miya would. [7]

When the enemy fleet of six ships advances toward the base, Miya allows Honami to join Tatsuya as he will be defenseless while using Material Burst against the artillery attacks from the enemy ships. [8] Miya, Tatsuya and Miyuki would later attend a funeral service of Honami and all that died during the battle and Miya does not seem to care that Miyuki is calling Tatsuya "Onii-sama". [9]

She used to be Miyuki’s teacher when it came to her magic exercises but since she tends to get sick from the overuse of magic and it has become a much heavier burden on her body.[10]

As Miya's condition worsened she was sent to Izu Villa. During her stay in Izu, there were three attempts to abduct her. But all the attempts were repelled by the security provided by the Yotsuba Family.[11]

When her illness became worse she was hospitalized for two years, and she died in 2094. [12]

Miya’s specialty magic lied not in perception nor prediction magic, but a Mental Interference Magic, and as ‘mental’ magic users are hypothesized to be closely linked with the ‘Akashic Record’, they possess exceedingly insightful intuition. With the use of this intuition, Miya would know when to be suspicious of others and when to be on her guard with danger lurking about. Her intuition was a set above the rest, earning her the title "Mistress of Lethe".

A forbidden Outer-Systematic Magic, also known as Mental Structure Interference that is unique to Miya. This Magic was used by Miya on Tatsuya to forcibly alter the area of his consciousness that creates strong emotions (the limbic system) in order to input an Artificial Magic Calculation Area, creating an artificial Magician. This experiment caused Tatsuya to lose all strong desires save the brotherly love he feels for his sister. This magic was also used to change Maya's consciousness' shape by changing the experiential memories into "knowledge", thus separating the emotions from her memories. This magic has a side effect of weakening Miya and removing the emotions of the target and the user, due to either guilt or the magic itself.

Due to her Mental Structure Interference magic, she can force her way to interfere with the unconscious area of the opponent. By closing their ‘Gate’ temporarily, she can stop their magic[17].