Regrowth (再成) is one of Tatsuya's innate and unique abilities. Changes in the Eidos can be rewound up to 24 hours in the past, copying and rewriting the Eidos from before any damage or harm from external sources were incurred, then using Magic Sequences to rewrite the current Eidos. The rewritten target will adhere to the updated information and restore itself to before any harm was suffered.

It is one of Tatsuya's two innate active magic abilities along with Decomposition, relying on his innate talent to directly interfere with structural information.

Unlike regular Healing Magic which needs to be repeatedly reapplied during its effective period, Regrowth's effect is perpetual and applying it to a wounded person will make it as if no injury had ever occurred. According to Miyuki, the magic is instantaneous and the target is not restricted to biological organisms. Tatsuya can restore anything, regardless of whether it's the human body or a piece of machinery.

However, Tatsuya must review the catalog of changes in the Eidos to completely copy the Eidos. To do this, he must read through all the stored information regarding the Eidos, including the victim's pain. All the pain is condensed into an instant as it is transmitted.

It is noted that the longer the duration of the wound, the greater the condensed pain. Owing to that condition, to erase an injury suffered an hour ago, the caster must suffer pain 10,000 times greater than the original.

When used on someone even if the heart had already stopped, the brain shut down, the throat torn open, if that was the extent of their injuries then revival was still possible. Even an instantly fatal wound, as long as rebuilding the body and restarting the circulation of blood would have had even the faintest chance of resuscitating the person

Regrowth also has the ability to suppress Miyuki's cooling magic when she can't control it. He can affect the information associated to the event of the "temperature" in the cooling process. With Regrowth he can return it's state back to the way it was before by ignoring the process, thus the world recovered from the cooling phenomenon in the form that the world was rewound.[1]

After having Pledge removed, Tatsuya's correspondence area of Eidos restoration magic "Regrowth" was expanded. It became possible to retroactively copy the structural information of the information body "imaginary body" directly linked to the mind, which his power couldn't reach until now.[2]

Self-Restoration is Tatsuya's unique ability to restore his own body to its original state when an abnormality/injury occurs. His personal Restoration ability automatically completes the repair processes in the blink of an eye, although he can deliberately suppress the activation. It has been said that "the speed of his Self-Restoration ability has long since surpassed the realms of human cognition speeds," and not even Kudou Retsu was able to notice it.

The scars on his body from the harsh training that the Guardians undergo, however, was due to the penalty he put upon himself for his in-capabilities, showcasing his ability to control the magic to some extent. It is automatically cast whenever combat efficiency drops below optimal levels, which Tatsuya cannot stop. If Tatsuya receives a fatal attack, his entire Magic Calculation Area gets monopolized by his Self-Restoration and he is unable to do anything else during that time. 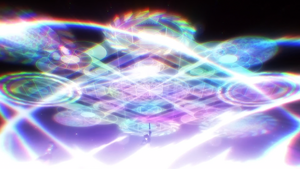 Tokyo Offshore Tower in the Eidos in preparation for Regrowth

Regrowth on the Tokyo Offshore Tower

Retrieved from "https://mahouka-koukou-no-rettousei.fandom.com/wiki/Regrowth?oldid=102799"
Community content is available under CC-BY-SA unless otherwise noted.