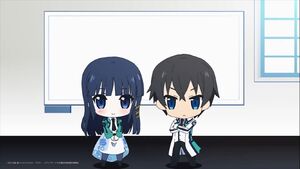 Mahouka for Dummies is a set of seven shorts that introduce the basics behind Mahouka Koukou no Rettousei. Chibi versions of the characters explain the world of Mahouka in a classroom setting. The first three were shown before the Anime was aired, while the fourth was shown during the Nine Schools Competition Arc, and the fifth and sixth during the Yokohama Disturbance Arc. A seventh was included later with the DVD release.

It's taught by Tatsuya and Miyuki. They introduces the Magic High Schools, as well as the divide between Course 1 and Course 2 students.

It's taught by Erika, Leo, and Mizuki. They introduce magic, by using CADs and Psions to manipulate Eidos.

It's taught by Katsuto and Mayumi. They explain the modernization of magic and the rise of Magicians through World War III. The purpose of the Magic Association is also introduced, like the licensing and regulating of Magicians.

It's taught by Shizuku and Honoka. They explain some of the events, as well as the dominance of First High School.

It's taught by Mikihiko and Mizuki. They explain Ancient Magic, the techniques that fall under it, and what is used to activate it.

It's taught by Azusa, Mari, and Suzune. They explain when, why, and what happens at the Thesis Competition held every year by the Japanese Magic Association in October. Also, what was discussed was the experiment held that year, based off trying to create a Gravity Control-Type Reactor.

It's taught Miyuki and Tatsuya. They explain Tatsuya’s innate abilities, Decomposition as well as it’s ultimate form Material Burst, and Regrowth. Healing Magic is explained and how it differs from Regrowth. Miyuki also summarises Tatsuya’s achievements in the anime.

Retrieved from "https://mahouka-koukou-no-rettousei.fandom.com/wiki/Mahouka_for_Dummies?oldid=96674"
Community content is available under CC-BY-SA unless otherwise noted.