He gives direct orders to Zhou Gongjin who is also from Dahan, who also hopes to accomplish the goal of destroying the Yotsuba.[1]

He is seen to look only about fifty years old but is actually 97 years old as of January of 2097. [2] He underwent Surgery of Perpetual Youth magic, when he developed it in 2049 while he was still in Dahan. He is one of the successful product of that magic. Due to that, even though his real age was 97, he retains the appearance of his 50's.

He has white colored hair (grey), however, he has dark skin; this is from him being an oriental Asian. Though he isn't seen to have any wrinkles, cracks, sagging, or age spots (senile lentigo). [2] 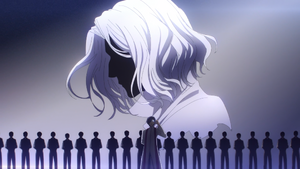 He was originally from Dahan, where he was a part of Dahan's military occultists. However, He was exiled from it in 2054, due to the internal conflicts in Kunlunfang Institute research between Modern Magic and Ancient Magic. Modern Magic comes out on top and all Ancient Magicians affiliated to the Institute; such as Jiedo Heigu are exiled. After that, the country was destroyed by the Yotsuba Family and then assimilated into the Great Asian Union.[2]

Jiedo desires to take vengeance on the Yotsuba Family for unclear reasons. He was the previous leader of the international crime syndicate, No Head Dragon. Currently, he is the leader of Blanche, where he is called the "Black Sage", or "Big Lord Heigu".[2]

With his connections, he is able to interfere with the workings of Japan, or at least he was until the Blanche and No Head Dragon chapters in the country were shut down.[2]

His grandson Richard Sun is the former leader of No Head Dragon.[2]

He is one of the Seven Sages who can access Hliðskjálf, which allows him to collect information from around the world with incredible efficiency.[2] He was killed by Benjamin Canopus, Molecular Divider.[3]

He specializes in Ancient Magic. The magics that he possessed aren't suited for direct confrontation. If we're talking strictly about duels, Zhou Gongjin was his superior and this was something Gu Jie himself was willing to admit.[2]

Jiedo communicates through a large, humanoid doll dressed in Chinese finery woven with countless gold and silver threads while sitting in a chair. This humanoid doll is a Sorcery Booster medium that was created from a human corpse, with its entrails removed and preservatives applied before directly modifying the brain. Behind the humanoid doll, a gigantic transmission device that rivaled a restaurant's freezer sat there with a cable coming out that plugged directly into the back of the skull. This doll is able to be communicated with through the use of Zombiemaker. This magic comes from mainland China and works by using the same techniques found in CADs that transform Psion signals into electric ones, thereby turning a corpse into a communication device that cannot be wiretapped.[2]

Gu Jie was proficient in techniques that used human organs or parts to create magic devices, such as ‘Sorcery Boosters’, to turn a human into a tool functioning similarly to a ‘Generator’ and a technique that changes humans into a 'Generator'.[2]

He is also proficient in magics that controls corpses from a distance about 10 Km. He used a kind of this magic (to have corpses carry bombs) when he attacked the Ten Master Clans Conference and another in kamakura to ambush the Yotsuba search team, a delayed-activation magic sequence with a key for its activation was most likely the death of the sequence's target, that is, after the death was established, these "new corpses" turned into puppets and fight again.[4]

He also has a technique to create, what he calls, "Dead Soldiers", they are not "Generator". These "soldiers" are "corpses" which uses their Life force, in order to fight.

He is also good at brainwashing magics, but these are more like deprive the free-will of the victim and use them like "Puppets".[4]

Is a magic surgery developed by Gu Jie and consists of implanting the magic inside of someone who then continually applies it. This magic succeeded in obtaining perpetual youth, but could not give genuine immortality. However, if the person the magic is performed on doesn’t have the aptitude, the compensation for staying young is to consume their life force. In other words, one's lifespan. There had been some cases of sudden death after three to six months.[2]

Retrieved from "https://mahouka-koukou-no-rettousei.fandom.com/wiki/Jiedo_Heigu?oldid=102110"
Community content is available under CC-BY-SA unless otherwise noted.