Mahouka Koukou no Rettousei Wiki
Register
Don't have an account?
Sign In
Advertisement
in: Characters, Japan, Magicians,
and 6 more

Phantom Sword Princess of the Chiba

Chiba Erika (千葉 エリカ) is a student of First High School,[1] a third-year Course 2 student. She is the youngest daughter of the Chiba Family,[2] one of the families at the pinnacle of the Hundred Families.[3]

She is Shiba Tatsuya's classmate and not long after became a friend and constant companion of the Shiba siblings.

Erika is described as a beautiful young girl whose short, bright red-orange hair, which became longer over the time is worn in a ponytail, and has distinct facial features that amplify the impression of her being a lively girl.[1]

She is bright, optimistic, and a person who gets carried away easily. Even for people whom she has just met, she often addresses them in a friendly manner — Tatsuya thought of it as being 'overly familiar' — of speaking. Her frank and seemingly arrogant attitude, however, often gets her into countless arguments with her fellow classmates but only a few people can put up with her, Saijou Leonhard in particular.[1]

She has described herself as someone who, during elementary school and middle school, had spent most of her time alone. She has a pleasant attitude and could easily get along with anyone, but she turns negligent towards relationships quickly.[4]

Her old friends call her cold and say that she acts like a whimsical cat, while others mentioned that she acts high and mighty. There have been many boys who wanted to be in a relationship with her.[4]

She has a habit of talking to herself, but has hid it as she entered high school.[4]

Erika displays blatant antagonism towards Watanabe Mari because she deems the latter unsuited to be her older half-brother, Chiba Naotsugu's girlfriend.[5]

Erika is a member of the Chiba family, which is one of the Hundred Families. In her family name, there is the number Thousand (千).[1]

She is the daughter of the head of the Chiba family and Anna Rosen Katori, her father's lover. Erika was born during the time when her father's legal wife was ill. She hadn't been allowed to use the family name of 'Chiba' until after her mother had passed away and did not receive the name of 'Chiba Erika' until she took the high school entrance exam.[6]

It was revealed that she lives alone in a separate building from the Chiba main household and holds contempt towards her father. She has two older half-brothers, Toshikazu and Naotsugu, and an older half-sister.[6]

Yoshida Mikihiko is a childhood friend from before they entered First High School. It seems they are aware of each others situations, maybe due to their same circumstances. There was a short foreshadow about Erika's past.[5]

The Defense Officials and Security Officials appreciate her contribution as a daughter of the Chiba Family. Though it seems that the Chiba Family is reluctant to use her as the poster girl, including the Family Head, Jouichirou. It's been half jokingly remarked that she's the "secret weapon" of the Chiba Family, the "Phantom Sword Princess of the Chiba". Details from the Yokohama Incident are known among the Ten Master Clans. [7]

The extent of Erika's, and by extension the Chiba's, influence over the military during sping break of 2096. Erika joins the rest of her friends for a vacation in Minamitateshima Islandm but seeing there are police all over the area they decide to leave. Before they leave on their VTOL, two of the police insists that they search their plane but Erika tells them to leave, and they do despite her being a civilian.[8]

A German family that heads a prominent CAD development company. They bear resentment towards Japan for Erika's grandfather's elopement with a Japanese woman, and haven't invested any family members in the Japanese Branch of Rosen until now.[9] 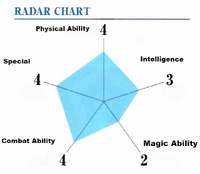 As a result of her training, she has developed the "Swordsman's Eye", which allows her to accurately assess her opponent's power and predict her opponent's moves.[10] During the Watatsumi Series rescue, Erika battles against Benjamin Canopus where she immediately sees how dangerous it is to cross swords against his weapon and immediately becomes aware of the similarity in fighting styles of Canopus with Angelina Kudou Shields to deduce that he is part of Stars. Canopus confirms this and also mentions that Erika must be the Chiba swordswoman that Lina mentioned in her report who can fight on par with her. [8]

As a Course 2 student, her skill with Systematic Magic, at least in invocation speed, complexity of spells, and power & scale of Zone Interference, isn't as great as some other Magicians. However, she seems to be highly adept with magic related to combat. She specializes in Speed-Type (possibly Movement-Type) and Convergence-Type Magic.

A basic Speed-Type Magic (or possibly Movement-Type Magic) that enhances the speed of the user's physical movements.[11]

Also known as Convergent Systematic Reinforcement, this Convergence-Type Magic reinforces the position of one physical object in relation to another. Erika uses this to strengthen her hollow baton-shaped CAD to the point that it can cut through solid metal. In order to avoid feeding a steady stream of Psions into her CAD and wasting her energy, Erika states that she uses this only at the time of extension and time of impact.[11]

A Speed-Type/Weight-Type Magic that first minimizes the inertia of the user and the weapon while closing in on the target at high speed, then this hidden sword technique transfers all of the stored inertia from the user and weapon movements to the point of contact with the target; with Orochimaru, the secret weapon of the Chiba Family, the stored inertia could be further enhanced by closing in from a distance further out to reach a maximum of 10 tons.[10]

A variant technique of Yamatsunami, where inertia is not restored upon the downwards swing of the sword, but rather upon the slice upwards. The weight of the blow is the same as the main technique where as it's speed is slower.[12]

Kirikage is a secret blade technique of the Chiba Family, where a magic sword causes damage to the Psion body of another. A Non-Systematic magic that when slashed at the "soul" of a person that bypasses physical armor like the USNA Thrust Suit, it deprives them of their motor functions.[13]

Non-systemic magic, which is just like 'Gram Demolition' ands it's classified as counter-magic. It neutralises magic by 'cutting' the magic sequences in the information dimension with a psionic blade. Tatsuya tells her to use her intuition to know the position of the enemy's magic to send a magic that is a Psion Sword. [14]

Erika uses a CAD shaped as a Telescopic Steel Baton (Nightstick) as her primary weapon. It has an Activation Sequence engraved upon it by the Isori Family (Isori Kei).[15]

The secret weapon, Orochimaru (大蛇丸), is the blade forged to use Yamatsunami. The entire length of the sword is 180 cm, the blade alone being 140 cm. It is one of the weapons that is in the pinnacle of sword-type armaments forged by the Chiba Family.[12]

Mizuchimaru (ミズチ丸) is a weaponized-integrated CAD in the shape of a sword. It was made by the Isori Family and adjusted by Tatsuya to be a downsized version of Orochimaru, allowing Erika to use a weaker version of Yamatsunami.[16] During Erika's battle against Canopus, Mizuchimaru is broken with Molecular Divider but Erika is still able to use Kirikage with the broken sword that incapacitates Ralph Algol. [8]