A number of character songs have been created for the characters in the Mahouka Koukou no Rettousei series. These ten songs were sung by various members of the cast and released on bonus discs which were included with the initial release of the anime series from April 2014 until July 2015 and later collected into the Song Book Album. 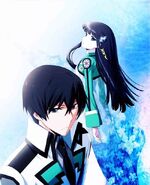 Hitomi no Oku no Fantasy