The success of the Mahouka Koukou no Rettousei light novels has lead to the series being adapted across numerous media, including several animations including the main anime series, some chibi shorts to help explain the setting of the series, called Mahouka for Dummies, as well as a movie titled The Irregular at Magic High School The Movie: The Girl Who Summons the Stars along with it's Official Guidebook.

Both the series and movie also have official soundtrack albums and theme songs, which have been released across several media formats. Additionally, many of the cast also sing character songs which were collated in the Song Book album.

Mahouka Koukou no Rettousei Season 1 (魔法科高校の劣等生 lit. "The Irregular at Magic High School") is an anime series produced by Madhouse that premiered on April 5th, 2014. It covers six of the first seven volumes of the light novel series. It is simulcasted by Crunchyroll and has been licensed for streaming by Aniplex of America.

A chibi series of animated introduction videos titled Mahouka for Dummies began streaming on the official website on February 22, 2014.

The anime initially released as a ten part limited edition run. These limited editions included a disc containing two to three episodes of the anime, a guidebook, a CD containing a character song and a 40 page short story booklet. The short stories were the eight part Dream Game and the two part Summer Holiday ——Another——.

It is streaming on Funimation with an English dub by Bang Zoom Entertainment and has been licensed for streaming by Aniplex of America.

The opening theme is Howling by ASCA, and ending theme is Namonai Hana (名もない花), meaning Nameless Flower, which is by Satō Miki (佐藤ミキ).

Like season 1, season 2 also initially released as a limited edition run. These limited editions included a disc containing two to three episodes of the anime, a guidebook, a CD containing a character song sung by the cast and a short story booklet. The short stories included with season 2 are Mission Hatsumoude, the two part Beauty and the Beast, and the two part The Flute Girl. 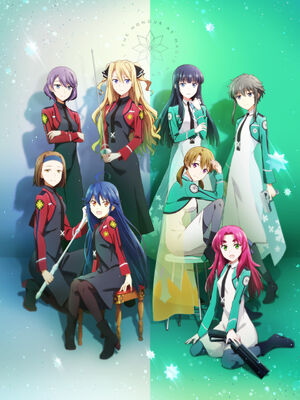 Mahouka Koukou no Yuutousei (魔法科高校の優等生), or Honour Student at Magic High School in English, is a spin-off of the original series. It focuses on the events of the main series from the perspective of the girls, primarily Shiba Miyuki. Unlike the main series, because this anime focuses more on the female characters than it's counterpart, it uses cuter art styles, humour, and themes more typically associated with those of a shoujo series designed to appeal more to a female audience.

This anime series was produced by Studio Connect and directed by Tachibana Hideki (橘 秀樹) and its score is composed by Iwasaki Taku (岩崎 琢). The series premiered on July 3rd of 2021. It covers the first eleven volumes of the Mahouka Koukou no Yuutousei manga. The events coincide with the first four light novels of the main series.

The opening theme is 101 by Sangatsu no Phantasia, and the ending theme is Double Standard by Philosophy no Dance.

The anime will initially release as a five part limited edition run. These sets will include character designs, new character songs by the cast, original manga chapters and the Honoka, Shizuku and Eimi's "Girls Talk of the Girl Detectives" shorts.

Mahouka Koukou no Rettousei - Tsuioku-hen is a 71 minute TV Special anime, produced by 8-Bit, that was aired on New Year's Day on Abema TV in Japan. It covered the prequel arc of the light novel's eighth volume, Reminiscence.

The TV Special was streamed for western audiences by Crunchyroll and Funimation on the same day.

Mahouka Koukou no Rettousei Season 3 (魔法科高校の劣等生 lit. "The Irregular at Magic High School") has been announced when the Reminiscence TV Special aired on New Year's Day, 2022. Further details have yet to be announced.